For thus hath the Lord said unto me,

Go, set a watchman, let him declare what he seeth.

Go Set A Watchman, the manuscript that preceded Harper Lee’s Pulitzer Prize winning To Kill a Mockingbird (1960), is undoubtedly the most anticipated release of 2015. But it’s also a difficult book to approach. Should we read it? In what context do we read it? And what do we make of it? Are all questions readers must grapple with.

I’m going to tackle this one in first person because I want to get up close and emotive, as I did when I wrote about rereading To Kill A Mockingbird.

This is the first book I’ve ever felt guilty reading. As several writers, including Lou Heinrich in her piece, ‘Profiting from Vulnerability’, for Overland and Lauren Strickland in her piece, ‘Is it ethical to read Harper Lee’s Go Set A Watchman?’, for Lip, have pointed out, it’s uncertain whether Lee was in a position to give her consent for the publication of this book. Lee, who is now eighty-nine, suffered a stroke in 2007. She has significantly impaired hearing and vision and resides in an assisted living centre. Since the publication of To Kill a Mockingbird she has shied away from the limelight, and, as Heinrich explains, it was only after the death of Alice Lee (Lee’s sister, lawyer and advocate) that a junior colleague brought the manuscript to light. I’m no Philip Marlowe, but Lee’s sudden agreement to publish Go Set A Watchman, after fifty-five years silence, makes it look an awful lot like something dodgy went down.

Full disclosure, I was aware of this issue of consent and still put Go Set A Watchman on pre-order. Ladies and gentlemen of the jury, a burning curiosity is my only defence and a weak one at that. As the book itself proves, none of us is perfect and I’ll take whatever shit you want to throw at me.

So now I arrive at the book itself. Go Set A Watchman is being marketed as an ‘essential companion, adding depth, context and new meaning to an American classic.’ This fancy phrasing has done a bang up job of befuddling readers, and I’ve heard a number of people referring to it as a sequel to Mockingbird. To be clear: it’s not. Watchman is the original manuscript that, by way of an almost complete rewrite, eventually became Mockingbird. Essentially it’s an early draft. If you know this going in, the uneven prose, the shifts between first and third person, clunks in the plot, inconsistencies with Mockingbird and overall work-in-progress vibe make a hell of a lot more sense. For me, as a writer and an academic, the appeal of Watchman lies in the fact that it is rough around the edges. It provides evidence of the writing process and offers readers rare insight into what goes on behind the scenes in developing a manuscript from an idea to a celebrated work of literature. Given that Watchaman is arguably more intriguing when read in the context of a literary artefact, and also that it is very much a product of the time and place in which it was written, I would have expected some form of critical introduction offering readers a contextual framework through which to approach the text. No such luck. This contributed to a general feel that, while Watchman is beautifully presented, its publication was somewhat rushed following the miraculous recovery of the manuscript.

Now what of the story? At twenty-six, Jean Louise ‘Scout’ Finch returns to Maycomb from New York to visit her father, Atticus, who is now seventy-two and feeling the effects of his years: ‘He had been a big man before age and arthritis reduced him to medium size.’ The extent of his diminishment comes as a shock to Jean Louise who ‘always thought of him as hovering somewhere in his middle fifties—she could not remember him being any younger, and he seemed to grow no older.’ Atticus’ marked physical change hints at a deeper impairment of character, and from the opening pages of Watchman, one of the most beloved figures of modern literature is foreshadowed a villain. Staunch supporters of Team Atticus, this is your cue to jump ship. Go reread Mockingbird, this book is not for you. Her whole life Jean louise has regarded her father as an immovable pillar of moral virtue:

Integrity, humour and patience were three words for Atticus Finch… [His] secret of living was so simple it was deeply complex: where most men had codes and tried to live up to them, Atticus lived his to the letter with no fuss, no fanfare and no soul-searching. His private character was his public character. His code was simple New Testament ethic… Even his enemies loved him, because Atticus never acknowledged that they were his enemies.

Jean Louise is therefore shocked to learn that Atticus is among the directors of Maycomb’s Citizens’ Council, which lobbies for segregation in schools and other public facilities. She observes his participation in the Council’s meeting from the coloured balcony of the very courtroom where, years before, Atticus presented his eloquent defence of Tom Robinson. 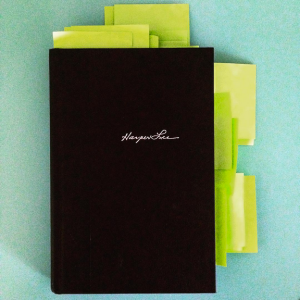 Until this visit, Jean Louise has viewed both her father and Maycomb through the rosy, uncomplicated lens of childhood. Watchman sets out to challenge that perspective and is largely a story about disillusionment and the need to recognise and destroy false idols. Jean Louise is shocked and when she finally sees Maycomb revealed in all its unflattering complexity, becoming ‘aware of a sharp apartness, a separation, not from Atticus and Henry [her beau] merely. All of Maycomb and Maycomb County were leaving her as the hours passed.’ Like Jean Louise, I met her grownup view of Maycomb with a heavy heart, as I too was seeking a cosy return to the familiar. I was not (though I should have been) prepared to find Jean Louise’s generation diminished by war and the Old South standing firm against the Civil Rights Movement, to discover the chinaberry trees of her childhood ripped out and the dusty streets of Maycomb paved and multiplying. Nor was I prepared to find Atticus, scrupulous gentleman and omniscient father, shrunk to the size of an ordinary man, flawed and influenced by the political turmoil of his time.

To let go of the past and stand as our own watchman (watchperson?) rather than relying unquestioningly on the examples set for us is perhaps the final, and in many ways most difficult, step on the path from child to adulthood. It’s a step Jean Louise struggles with:

I did not want my world disturbed, but I wanted to crush the man who’s trying to preserve it for me.

It’s a transition Lee struggles with, too. Though still possessed of her plain-spoken wit, for much of the book Jean Louise reads as a spoiled product of her class and surveys Maycomb from her moral high ground (which, by today’s standards is actually rather shaky). She’s not ‘colourblind’ as she asserts, but rather blind to her own privilege. Towards the end of the book in particular she becomes somewhat wooden and didactic: a mouthpiece for an (uncertain) ethical perspective that’s still resolving itself into a character. Atticus too appears ill-drawn. His racist beliefs are at odds with his actions (or at least his actions as Jean Louise recalls them), and as Lee points out (with a heavy hand), he’s a watchman who takes the time from different clocks:

On some days he wore two watches… an ancient watch and chain his children had cut their teeth on, and a wrist watch. The former was habit, the later used to tell time when he could not move his fingers enough to dig in his watchpocket.

While Atticus’ views on segregation add new (if unflattering) depth and perspective to his character, he appears inconstant. Consequently, the conflict between father and daughter and the ethical positions they defend is somewhat confused and the ending is unsatisfying. From a plotting perspective, too, the major crisis falls flat—there’s not enough at stake, not enough dramatic action. It’s a story that comes down to two stubborn people arguing across a desk.

Watchman‘s triumph  lies in the anecdotes remembered from Jean Louise’s childhood. Here readers find the Scout they know and love, scrapping with Jem and Dill in the backyard on a summer’s morning, fearing herself pregnant after her first French kiss and being mortified when her falsies come loose at her first school dance. In these passages Lee writes with a steady hand. Her prose sparkles and flows with gleeful energy and both Scout’s internal monologue and dialogue ring true. It’s clear why Lee’s literary agent suggested she go back and relocate her story in Scout’s childhood.

Watchman is significantly more emotionally and politically complex than Mockingbird, even if the execution is clunky in places and, loss of Atticus-the-hero aside, I admire the story Lee tries to tell. However, Mockingbird was the first novel I read where I was really cognisant of the care and craft that had gone into the writing, and, for me the real joy of reading Watchman was seeing another layer of that process. The fact that the writing of Watchman precedes Mockingbird, ensures that it’s not an exercise in fan pleasing. Many readers will despair to see their childhood idols, particularly Atticus, made mortal. But the hard, terrible beauty of this story lies in this very transformation, and in watching Scout come to terms with the realisation that she must now set her own course.

While I have lingering guilt for reading Watchman, my curiosity was ultimately rewarded. It was an uncomfortable, challenging and at times upsetting read, but it gave me a more nuanced and complex understanding of Mockingbird and stands as an intriguing (if imperfect and somewhat dated) narrative in its own right.