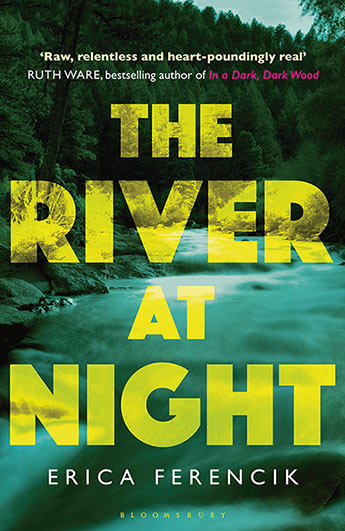 A fast-paced thrill ride in which four women’s courage and friendship are put to the test.

Win isn’t a thrill-seeker. Or a risk taker. Or remotely interested in stepping outside her comfort zone. But following the death of her brother and a messy divorce, her life has fallen into a rut. She’s stagnating in a job that she doesn’t find challenging, she has little social life to speak of and her closest companion is her cat.

She needs a change, or, at the very least, a break. Which is why she reluctantly agrees to join her three oldest friends, Pia, Rachel and Sandra, for a girls’ weekend of white water rafting in rural Maine.

However, when disaster strikes early in the trip, the friends find themselves in deep water (see what I did there), and the rapids are the least of their problems.

The River at Night (Bloomsbury, Jan. 2016) is a fast-paced thrill ride in which four women’s courage and friendship are put to the test.

I loved that The River at Night is primarily a story about women and female friendships. And also that it’s not the story you might expect—the one where the girls band together to fight external threats. Win, Pia, Sandra and Rachel have been friends for decades, but their lives have gone in very different directions, and they don’t see each other often. In fact, other than their shared past, they no longer have much in common. After the initial excitement of seeing each other wears off, old grudges resurface and tension rises. Rather than binding the women together, the terror they meet on the river forces long-repressed conflicts into the open, and if the women are going to have a chance of making it back to civilisation, they must find a way to reconcile their differences.

By taking the women out of the city and dropping them in wild, Ferencik strips away their civil facade and takes an honest look at the power dynamics operating beneath. And watching the rising tension and shifting power plays within the group is almost more thrilling than the horrors that encroach from the wilds beyond.

I also loved that Win, Pia, Rachel and Sandra aren’t the girls most likely to survive Maine’s notoriously unforgiving wilderness. They’re settling into middle-age, packing a few extra pounds and attached to their creature comforts. Win’s recently started swimming laps at the local pool, but she’s still far from fit and a city slicker to her core, Sandra’s a suburban mum with a hyper-controlling husband—overeager to keep the peace—and Rachel is a little tetchy and blind without her glasses. Pia’s an exercise and adrenaline junkie, but even she’s used to getting her kicks in more controlled environments. The women all have their strengths too, but they make for a refreshing change to the token big-breasted, svelt twenty-something with a dubious double PhD in Something Sciency that often gets lumped in with an otherwise all-male cast in these types of stories.

The River at Night is also a compelling, atmospheric thriller. Being Australian, and having not ventured north of Salem, MA, in my travels around the US, the rural Maine setting feels especially wild and alien—the province of Stephen King novels. I’m a huge fan of any story where characters are slowly lured off-map and forced to fend for themselves, and Ferencik does a fabulous job building tension and crafting a series of unfortunate events that steer her characters off-course.

What starts bad, gets worse, and the horrors Win and her friends encounter on the river are truly terrifying and guaranteed to get your pulse up. That said, I was maybe hoping for just a touch more peril. Or at least to see it drawn out a little longer. The big ‘monster’ of the book turns up right on cue, but without a whole lot of foreshadowing. I would have found it scarier if there had been more of a sense of this uh, thing, creeping around the edges of the story before the women meet it head on. And I wanted to see the cat-and-mouse game play out for longer between the ‘monster’ and the women.

However, I’m not sure how fair I’m being with that criticism. The River at Night has undeniable parallels with Deliverance. I haven’t read James Dicky’s novel, but I’m a huge fan of John Boorman’s 1972 film adaptation. The two things I think Boorman’s film does really well are foreshadowing and jaw-dropping horror, and as I was reading The River at Night, I couldn’t help but compare the two. Even thirty-five years on, the ‘squeal like a pig’ scene in Deliverance remains utterly horrific and hard-to-watch and just looking at a banjo gives me the creeps. In terms of sheer terror, it’s a hard story to top. But Deliverance isn’t without its problems. It champions some pretty abhorrent stereotypes, and there’s nary a woman in sight. So while The River at Night didn’t sate my horror-junkie bloodlust to quite the same extent, I ultimately found it a richer, more satisfying story.

Overall, The River at Night is an ominous and suspenseful read—just the ticket for the armchair adventurer.

See The River at Night on Goodreads and purchase through Amazon, Book Depository and Booktopia.

Thank you to Bloomsbury Australia for providing a copy of The River at Night in exchange for an honest review.

Thanks also to Grammarly for picking up four critical and eleven advanced issues in my draft of this review. If, like me, you have trouble with typos, do give Grammarly a go!

Like what you see? Get the latest from Lectito delivered to your inbox.