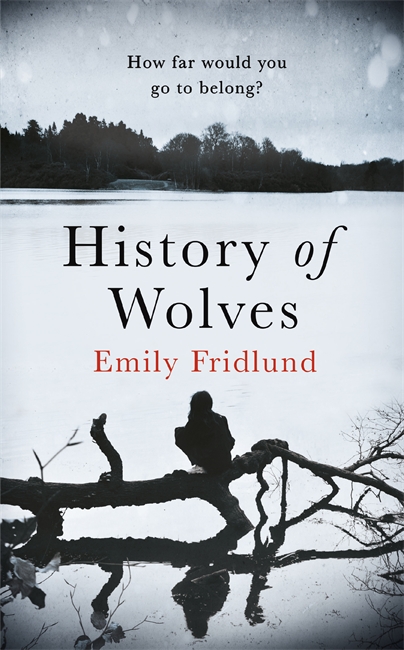 A deeply unsettling coming-of-age story about an outsider’s need to belong that explores the murky space between innocence and willful ignorance.

For a long time, fourteen-year-old Linda has been on the outside looking in. She lives with her parents, or at least the people she thinks are her parents, in the rundown remains of a commune in rural Minnesota. When she was little, and before the commune disbanded, she had a best friend and a large adopted family to look after her, but now the other kids at school call her a freak and her parents pay her little attention.

Linda misses that sense of belonging. She yearns to be wanted. Needed. So when a young family take up residence in a big, light-filled house by the lake and hire Linda to babysit their son, Paul, Linda believes she’s finally getting her wish.

However, while Linda soon feels like part of the family, joining them for sleepovers and elaborate breakfast feasts at midnight, it’s clear that something isn’t quite right. The parents’ behaviour becomes increasingly odd and erratic, and no one seems to want to acknowledge the fact that there’s something deeply wrong with Paul.

When tragedy inevitably strikes, Linda is left to wonder if she’s in some way responsible. How much did she really understand about the family, and how much did she choose to ignore?

History of Wolves (Grove Atlantic/Weidenfeld & Nicolson, 2017) is a deeply unsettling coming-of-age story about an outsider’s need to belong that explores the murky space between innocence and willful ignorance.

First, I want to say that Linda is one hell of a protagonist. She’s right up there with Evie in Emma Cline’s The Girls, which was one of my favourite reads last year. I love Linda because, for me, she embodies how I felt as a teenager: awkward, self-conscious, unsure of her changing place in the world, but with a streak of animal cunning. There’s an ugliness—something ferral—about her that Fridlund doesn’t shy away from. And she’s motivated by that terrible, primal neediness, strongest when we’re young, that sees us do almost anything to find our tribe. She’s not particularly likeable, but she is compelling. She’s also not entirely trustworthy, which makes for unsettling reading.

History of Wolves is a coming-of-age story, but it’s not YA. While the bulk of the story is narrated from fourteen-year-old Linda’s point of view, it’s retrospective—a confession—her adult self still haunted by the terrible events of the past. And it is, from the first, a story without hope, which is why I’d class it as lit. fic. rather than YA. It belongs with novels like The Secret History, The Girls and The Strays—stories about naive boys and girls willing to overlook terrible crimes in order to escape their circumstances and find a sense of belonging (and if you’re a Lectito regular, you’ll know that these kinds of stories are a particular favourite of mine).

The narrative is eerily atmospheric, with the wilds of Minnesota offering a stark and treacherous landscape that Linda navigates with unsettling ease. Despite her desire to escape, the deep dark of the woods is a vital part of who she is.

Because Linda is somewhat naive and unreliable, the reader is left to fill in many of the gaps, and in some places, I found those gaps a little too large. Key example: the significance of ‘the history of wolves’. Early in the narrative, Linda does a history presentation on wolves, which, as other characters note, is a strange choice for a history project—a choice Linda doesn’t explain. Throughout the story, Linda tells people about her obsession with wolves, but she never really shows much evidence of this. Presumably, her interest in wolves has something to do with their pack mentality and her yearning to belong. But I’m only guessing.

Throughout the narrative, there were a number of details, such as this, that left me thinking: ‘I suspect this is significant, and I can kinda, sorta see where Fridlund is heading with it, but the connection isn’t quite there.’ I think it, in part, comes down to the naive narrator. While the limited perspective allows the reader to empathise with Linda’s loneliness and confusion, which is one of the book’s great strengths, Fridlund is occasionally too restrained and doesn’t offer enough for the reader to read between the lines of Linda’s experience. Without giving too much away, I would have liked to know more about the family. There’s enough info. to understand why the tragedy unfolds the way that it does, but much of it comes very late in the story and consequently the mother, Patra, in particular, comes across as a bit wooden.

That said, I initially received an uncorrected proof of History of Wolves from Grove Atlantic, and while Hachette Australia was kind enough to send me a finished copy just last week, I haven’t had time for a re-read, and it’s possible that some of the gaps have been filled in the published version. I do plan to revisit this one when I get the chance, so I’ll keep you posted. And, look, minor criticisms aside, I loved History of Wolves. It’s stark and sinister, yet also vulnerable and tender—one of those rare stories that really gets its claws in.

See History of Wolves on Goodreads and purchase through Amazon, Book Depository and Booktopia.

Thank you to Grove Atlantic for providing an ARC of History of Wolves, and to Hachette Australia for providing a finished copy in exchange for an honest review.

Thanks also to Grammarly for picking up three critical and thirteen advanced issues in my draft of this review. If, like me, you have trouble with typos, do give Grammarly a go!