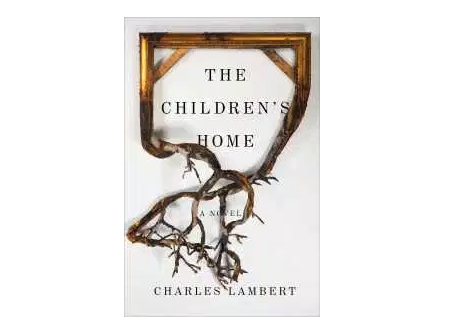 Charles Lambert’s The Children’s Home (Scribner, Jan. 2016) is a strange and curious tale of family secrets, redemption and what it means to be ‘good’.

Morgan, a disfigured recluse leads a solitary life with his housekeeper, Engel, on his family’s sprawling estate until, one by one, children of varying ages mysteriously appear within the grounds to claim the mansion as their home. Soon after, when one of the children falls ill, Morgan befriends a local doctor, Doctor Crane, who becomes an honorary member of the household.

For a time, Morgan appears to have found the kind of family he’s always yearned for—a family who looks beyond his scarred face and hand and loves him for who he is. However, as the children grow their strangeness intensifies, oddities and surprises surface throughout the house, and it becomes increasingly clear that Morgan cannot shut out the wider world or escape his past forever.

I was drawn to The Children’s Home first by the cover, then by the blurb which describes the story as being ‘for fans of Shirley Jackson, Neil Gaiman, Roald Dahl, and Edward Gorey’. Indeed, Lambert’s prose has a dark, fairytale quality reminiscent of all those above, and if The Children’s Home is ever adapted for the screen, I’ll bet a month’s worth of books that Tim Burton will be in the director’s chair.

In many respects, it’s a fascinating and compelling tale—a work of brilliant imagination and inventive flights of fancy—narrated in the style a children’s bedtime story. And this comforting, authoritative voice creates an eerie juxtaposition with the story’s Gothic undertones. Here’s a sample:

Other children arrived soon after that, as though Morgan had earned them by taking in the first one. Some were abandoned, as Moira had been, left on the kitchen step, which was now checked hourly; others, he suspected were given to Engel at the door, by whom, he didn’t know. These were the children who arrived empty-handed. By the end of the third month of Moira’s presence in the house, there were six or seven, he wasn’t sure exactly, of varying ages. Moira remained the youngest. According to Engel, who seemed to know, she couldn’t have been more than a few weeks old when she was left. The oldest among them was a fair-haired boy who walked into the house one day with a cardboard tage—the kind used for parcels—attached to his wrist, on which the name David had been written in a childish hand. Taken immediately to Morgan, he stood up like a soldier before his desk, stared straight ahead, and announced in a solem yet singsong voice, that he was five years old and had no mother and father and would behave well if treated well. The ages of the others ranged between these two, Moira and david, whom Morgan regarded as the most precious, perhaps because they were the most easily destinguished; Moira the first and youngest, and David, with his tag, the eldest.

For the first half of the story, I was enchanted by the strangeness unfolding on the page before me and curious as to where it would lead. But I soon began to wonder if it was leading anywhere. Lambert writes as a magician, performing trick after trick, with each chapter appearing a beautiful and carefully worked vignette, but the novelty soon wears thin. He lingers too long in the setup and by the time the story properly got going, my interested had begun to flag.

And then what begins as a dark and whimsical fairytale descends into Orwellian parable. Here my intrigue soured to scepticism, as though I were a child realising too late that she’s been lured into a lesson. But, weeks after reading, I still can’t determine what that lesson is. Lambert makes a vague stab at challenging conventional ideas of ‘good’ and ‘evil’ and touches on themes of child labour, profiteering, abandonment, the return of the repressed and post-colonialism, only to shy away before mounting a proper examination. I looked up from the final page baffled: What is this story about? What is Lambert hoping to achieve here?

Lambert uses Brechtian chapter titles: ‘Chapter One: in which Morgan explains the living daylights and the children begin to arrive’, ‘Chapter Four: in which Morgan’s library is described and Moira speaks’, ‘Chapter Ten: in which Doctor Crane and Engel discuss the nature of disappearance’, presumably to shift the focus from what happens to how and why it happens, but I found them portentous and, though I initially warmed to the story’s cosily self-assured style, once Lambert turned his hand to vague moralising, I found it trite and condescending.

While I found Morgan a complex and sympathetic character and enjoyed the various enchantments of Lambert’s tale, the story as a whole prompts more questions than it answers, but in a way that left me confused rather than thoughtful. This one didn’t quite hit the mark for me.

See The Children’s Home on Goodreads and purchase through Amazon, Book Depository.

Thank you to Scribner for providing a copy of The Children’s Home in exchange for an honest review.