Life in small town Queensland has always been tough for sixteen-year-old Clancy Underhill. She’s a loner. Doesn’t fit. That she’s forced to get around on a bike several sizes too small and can’t afford to replace her one pair of ratty boots doesn’t help. Neither does having an older brother who’s dropped out of uni to track down the mythical Beast of Barwen. Or the fact that Clancy likes girls.

However, Clancy’s problems are overshadowed when her dad is involved in a car crash that leaves two teenagers dead. With the new school term fast approaching, the town turning against her family and two girls suddenly vying for her attention, Clancy has to answer some hard questions about who she is and where she belongs.

Clancy of the Undertow (Text Publishing, Nov. 2015) is a morally complex, heartfelt and (at times) achingly funny story of self-discovery and small town claustrophobia.

Currie’s first and (to date) only other novel, The Ottoman Motel (2012), was shortlisted for the Commonwealth Book Prize and the Queensland Literary Awards. Clancy of the Undertow is his first foray into Young Adult fiction, and I have to say, he’s nailed it. His sparky, whip-smart prose and Clancy herself had me smitten from page one, where she introduces herself with a comparison to her boss at the local beauty counter:

She’s thirty-two, voluptuous, perfect. I am sixteen, with the physique of a tree frog.

This is Clancy’s main problem: she doesn’t fit anyone’s expectations.

My whole life, pretty much, has been back to front. When I was little, I knew I was supposed to wear dresses and dream of princesses and run shrieking from boys in the playground, but I never wanted to. I remember being far more interested in things I wasn’t supposed to be interested in. I don’t think that’s really changed.

Later, she tells Nancy, the new girl in town: ‘…I’ve just always been, you know, the opposite. Of what I’m… supposed to be.’

Clancy is eager to escape her small Queensland hometown of Barwen. Because she doesn’t conform to her peers’ idea of what’s ‘normal’, Baren is a hostile place for her to navigate. It’s stifling and full of gossip. Currie reflects this hostility in the landscape itself. His story is set in the humid weeks of late summer, and Clancy has only her kid-sized BMX to help her get around, making every journey an odyssey:

I cycle back up the dirt path, not bothering to get up off my seat as I judder across the tiny stones. … I pedal furiously up the hill and cut in behind CityView Motel’s car park. Throw my bike over the fence and drag it up the cow paddock. As always, I can’t tell what’s a divot and what’s a cowpat but I plough on regardless. There’s a crowd of cockatoos dotting the grass white and they flap madly as I walk through them, flying up as a big swarm, circling one of the two huge eucalypts on each side of our house. Late summer is brimful with birdscreech until even after dark. Tich [Clancy’s younger brother] is there by the front steps standing in a puddle of water he’s made by letting the hose run.

There’s currently a big push towards depicting more diverse stories and experiences in YA, and it’s refreshing to see Currie run with an LGBT protagonist, particularly as he resists focusing the whole story on her sexuality. Rather, Clancy’s interest in girls is just one aspect of her character and her uncertainty in coming out numbers among the many challenges she faces.

Clancy is an endearing narrator, with a voice that’s wholly her own and, because both she and her situation are so multi-dimensional, I wanted to see a little more of her spark and complexity reflected in her story, namely the ending. In the first half, Currie establishes both moral complexity and tension with Clancy’s dad being questioned over his involvement in the fatal car crash. The town has already decided he’s guilty and, if he’s officially made accountable, there could be life-changing consequences for Clancy and her family. As the investigation unfolds, the family dynamic begins to shift, and the scenes between Clancy and her father are deeply moving. Meanwhile, Clancy is dealing with a number of her own issues and asking big questions about her identity. However, towards the end, Clancy faces a major crisis that essentially gives her a clean slate, following which all her problems are quickly and neatly resolved. It just feels a little too convenient.

The story’s strength is its characters and the shifting relationships between them. As mentioned, the scenes between Clancy and her dad had me all choked up. The banter between Clancy and her older brother, Angus, zings, and watching their sibling rivalry evolve into a complex and genuine friendship is one of the highlights of the book. Equally engaging is Clancy’s uneasy relationship with Nancy, the new girl in town who proves to be a far cry from the pampered private school snob Clancy imagines. The only relationship that doesn’t ring true is that between Clancy and Sasha. Clancy’s had a crush on Sasha seemingly forever, but Sasha’s older—she’s left school and works for her mother’s travel agency. She has a boyfriend, Buggs, and spends all her time with him and his friends. A self-professed high school loner like Clancy isn’t even on her radar. So when Sasha suddenly wants to hang out with Clancy, it’s fishy. Her key motivation appears to be allowing Currie to teach Clancy a lesson in worshiping false idols.

Overall, Clancy of the Undertow is a story of complex, compelling characters with a distinct Aussie flavour. Currie speaks fluent teenager, and I really hope he sticks with YA. 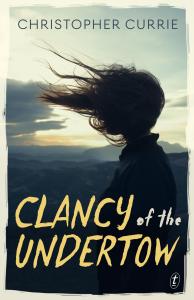 Thank you to Text Publishing for providing a copy of Clancy of the Undertow in exchange for an honest review.

See Clancy of the Undertow on Goodreads and purchase through Kobo.