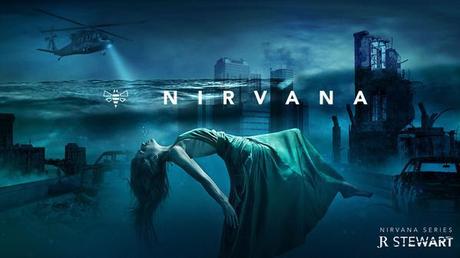 A decade has passed since the Extinction which left Earth a barren, barely hospitable wasteland. People are reliant on the corporate giant, Hexagon, for survival. The company controls food production, research, housing and, most importantly the virtual reality simulator known as Nirvana. Every week workers give up half their pay for fifteen minutes in Nirvana—a place where they can play out their wildest fantasies, relive old memories, or simply escape from the nightmare of their daily lives.

Seventeen-year-old Larissa Kenders knows she should count herself lucky to have her job as a Nirvana operator, especially given her rebellious past as a former punk rock star and animal rights activist. In fact, she probably wouldn’t have her job at all if not for her boyfriend, Andrew, one of Hexagon’s prodigy VR programers. When Andrew supposedly dies in a lab fire while working on a secret project, Kenders suspects foul play. But finding answers means going deep inside Hexagon, into Nirvana itself, and Kenders is no longer sure what’s real and whom she can trust.

Going in, I thought, at worst, Nirvana would be yet another YA dystopian page turner in an already saturated market, but it also had the potential to offer a more sophisticated story. From the blurb, it sounded like the love child of Gwyneth Jones’ ‘Bold As Love’ trilogy and William Gibson’s Neuromancer—both personal favourites. Also, J. R. Stewart is supposedly an IT heavy hitter specialising in virtual reality technologies (the book is published under a pseudonym to protect the author’s true identity). So I figured that even if the story wasn’t all I hoped, there’d at least be some innovative tech stuff to keep things interesting. Maybe I set the bar too high on this one, but frack me, what a disappointment!

Nirvana tackles an important if somewhat tired idea: that our growing dependence on digital technology, mass farming and the corporations that control these industries is problematic. As is corporate funding of academic research. Unfortunately, Stewart uses the story as a vehicle for a rant, and the tone is that of an angry hippie screaming from the pages: ‘Money is EVVVVIIIILLLLLL!!!!’ It reads as patronising, and overly simplistic. And when the screaming occasionally dies down, there’s little to hold the reader’s interest.

The characters are flat. I know that Kenders is ‘feisty’, ‘a loose cannon’ and ‘has her head in the clouds’ because the other characters say so. Three days after reading, I’m struggling to remember anything else about her. I couldn’t even describe what she looks like. Mostly, the characters serve as ideological mouthpieces. There’s a love triangle between Kenders, Andrew and Serge (Kenders’ childhood friend turned billionaire sellout), but no real chemistry or tension. Andrew also has an evil ex-girlfriend, who’s now head of Hexagon’s security and hellbent on bringing Kenders down. We’re told she murdered Kenders’ cat in a jealous rage. She’s fun. The rest of the cast are a cliched blur of people who may or may not be helping Kenders. It’s all a little unclear.

And that for me was another problem. For a story with an overwhelming amount of exposition, there’s a lot that remains confusing and unexplained. The story opens with Kenders in a therapy session using Nirvana’s virtual reality simulation to work through a memory of being sexually abused by her father as a young girl. This has no bearing on the story whatsoever. It reads like Stewart had plans to work Kenders’ backstory into the narrative proper, but got distracted and never returned to it. Then there’s Hexagon’s Red Door program. I still have no idea what Red Door is or why everyone’s so afraid of it, although the characters bang on about it a lot. I imagine it’s going to come into play in book two, but that didn’t really help me while reading this story. The planet’s already destroyed, so for much of the book, it’s not really clear what’s at stake. There’s some talk about Hexagon using Andrew’s super secret research to further develop the virtual reality porn and gambling industries, which isn’t great, but there’s so little detail given that it’s hard to care.

There’s also a lot of inconsistencies. For instance, the technology seems relatively limited. There’s no mention of the internet or what happened to it. There’s a fair bit of talk about Kenders’ world being ‘a holographic world, wth holo-phones, holo-albums, holo-readers; you name it’, but no one seems to make much use of these devices. It’s also hinted that there have been huge advances in biotech, but again, this doesn’t really work its way into the story. Meanwhile, environmentalists hand out paper flyers at protest gigs. Which struck me as odd, and hypocritical given that the lack of trees is a huge problem and one of the things they’re protesting against. Also, for or some reason everything is stored on discs—presumably to keep information from Hexagon or whatever, but this isn’t ever really explained either. The timeline is equally problematic. Kenders is seventeen and she’s already been to university, had a successful career as a punk musician and animal rights activist and now holds down a job at Hexagon. She was supposedly a key organiser of protests leading up to the Extinction, which takes place a decade before this story starts, seemingly making her one of the world’s youngest environmental campaigners, and she continually refers to adult things she did ‘years ago’. I kept finding myself thinking: honey, you ain’t got that many years behind you—when exactly were you doing all this stuff?

On a large scale, the plot is predictable, but the details are lacking or else confused. The world appears half-conceived. I struggled to picture it. And the writing is flat. Monotone. The language is plain, at times cliche and riddled with exposition that leaves the reader with more questions than it answers.

Overall, Nirvana reads as a rough draft rather than a polished novel. There are some really basic problems that should have been addressed before publication. It’s is a shame, because the premise is a good one.

Thank you to Blue Moon Publishers for providing a copy of the book in exchange for an honest review.

Nirvana is available through Amazon, Book Depository and Kobo.