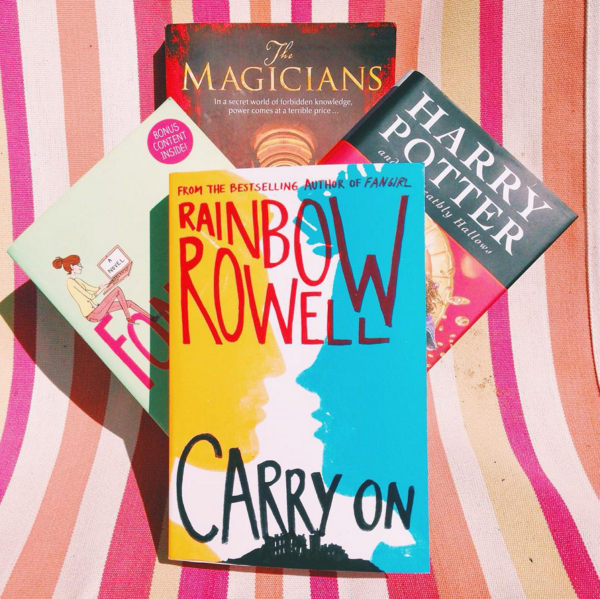 When I learned Rainbow Rowell had a new book out, I got excited, and when I heard it was a Simon Snow story, I thought: OMFG YES!!!—but how’s that going to work? Has Rowell turned Gemma T. Leslie’s fictional series into an actual novel? Is it a fictional character’s fan fiction of a fictional book? Or is Rowell taking the meta to a whole new level? 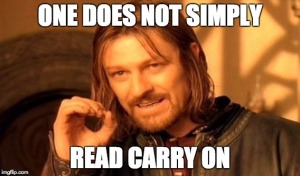 For those who have no idea what I’m on about, Carry On is a stand alone read, but it helps to have a little context. In Rowell’s previous novel Fangirl (2013), the protagonist, Cath, writes fan fiction inspired by the uber-popular (and fictional) ‘Simon Snow’ series by Gemma T. Leslie. The series is basically the ‘Harry Potter’ of Cath’s world. In Leslie’s novels, Simon is the Chosen One who, with the help of his magician friends at the Watford School of Magicks, wages war against the evil Humdrum. Fangirl contains excerpts from both Leslie’s books and Cath’s fanfic, in which Simon falls for the school bully/his arch nemesis, the vampire Baz. Are you still with me? Carry On is Rowell writing her own story in Leslie’s world, as she puts it:

I’d written so much about him through these other voices, and I kept thinking about what I’d do with him if he were in my story, instead of Cath’s or Gemma’s. … It was a way for me to give Simon and Baz, only half-imagined in Fangirl, the story I felt I owed them.

Reading this, I wasn’t convinced. I love the Simon Snow sections in Fangirl and I was excited to read more in that world, but a Chosen One/vampire romance mashup with a gay twist seemed a little like adding a pinch of diversity to a recipe for a surefire bestseller and watching the money trucks roll in. I’m not against writers making truckloads of money (in fact, more money for the writers, please), but with Stephenie Meyer doing the whole Twilight gender-swap thing, E. L. James revisiting 50 Shades of Grey from the guy’s perspective and the morally questionable publication of Go Set a Watchman, it seems like there’s a lot of money being made in publishing at the cost of creativity and integrity, and I really, really, REALLY hoped Carry On was more than an exercise in fan pleasing.

Carry On finds Simon in his eighth and final year at Watford. After another summer in foster care, he’s thrilled to be heading back to school, even if it means sharing a room with his nemesis, Baz. Except this year Baz doesn’t show. In fact, it seems like everyone is keeping their distance: Simon’s girlfriend, Agatha, will barely make eye contact with him and the Mage, his guardian and Watford’s acting headmaster, is so busy fighting the old magickal families and tracking the Humdrum, he has little time for Simon. Only Penny, Simon’s closest friend and Watford’s resident whizz kid, wants to hang out. But even Penny is sick of listening to Simon drone on about Baz.

Simon’s final year at Watford is shaping up to be something of a let down until the ghost of Baz’s mother appears in the boys’ room to deliver a cryptic clue about her murderer. When Baz finally shows up, eight weeks into the school term, he and Simon form an uneasy truce to catch the killer and defeat the Humdrum once and for all. However, once Simon and Baz stop trying to kill each other, it doesn’t take long for the true reason for their mutual obsession to emerge.

The story is playful and full of parody. The magicians cast spells using cliches and famous film quotes: Fine-tooth comb to search a text, Come out, come out wherever you are to find someone and These aren’t the droids you’re looking for to misdirect. Every meal is a feast and Simon is almost never without a full plate, and rather than Voldemort and Death Eaters, there’s the Humdrum and numpties. In fact, one of the things I really admired about the book is the way Rowell challenges the assumption that a magical life is a better life and draws attention to the fact that a lot of the problems magicians solve with magic in stories such as ‘Harry Potter’ are problems we already have workable solutions for. For example, why send a bird for someone when you can just text them? Or magic notes to the wall when you can use sticky tape, or use spells to search old newspapers for someone’s name when you can just Google it? In fact, the magic in Carry On is almost all party tricks that have no effect whatsoever on anyone or anything outside the magical community. It’s cool, but deliberately pointless.

Carry On also gently chides the elitist worlds Chosen One narratives typically occupy, and addresses one of the bigger flaws in ‘Harry Potter’, namely that the whole UK magical community revolves around Hogwarts; if students don’t go on to become teachers there and there’s no dark lord to hunt down, what are they supposed to do with seven years’ magical training? Especially if they have to hide their magic from non-magical folk.

The religion metaphor crops up a few times as does the idea that magic is a literal manifestation of power—power that’s rarely used for anything but selfish means. And it’s not long before Rowell’s heading into ‘power tends to corrupt and absolute power corrupts absolutely’ territory. It’s a good message, but a little trite—there’s nothing here that readers haven’t seen before.

The magical elements of the plot read as though Rowell is a Harry Potter fan struggling to come to terms with the fact Hogwarts is a problematic dream—she wants to acknowledge the flaws she sees, but she’s afraid to really sink her teeth in. I can empathise. But Carry On isn’t the first book to cast a critical eye over cosy secondary worlds, and nor is it the best. For me, Lev Grossman’s The Magicians (2009) takes that prize. It’s the first in his trilogy of the same name, and one of my favourite reads. The Magicians opens with the telling line: ‘Quentin did a magic trick. Nobody noticed.’ Chosen One, Quentin Coldwater, is accepted into the magical university, Brakebills, and then when he and his clique of quirky magician friends realise that their elitist magical education has left them unequipped for life in the real world, they magic their way into Filory (think Narnia) and set about finding themselves a quest. It’s a nuanced and wickedly satirical exploration of elitist institutions, Chosen One narratives and the idea that being a hero is something destined rather than something we actively prove.

But back to Carry On. What the story lacks in magical innovation, it makes up for in its characters. Rowell has a talent for writing young adults. The Carry On cast is a little more cartoonish than characters in her earlier novels, but Simon and his friends are warm and funny and complex enough. Perhaps most importantly, they challenge stereotypes. Agatha is the drop-dead-gorgeous trophy girlfriend, but she’s also completely indifferent towards magic and would much rather spend her time watching Mean Girls with her Normal friends than casting pointless spells. She stumbles upon the major climax in her ugg boots and promptly runs away. She drives a Volvo. I love her. Penny is the token know-it-all, but she’s a proper nerd. Not a hot nerd. A Nerd. She talks too much. She’s pushy. And her person and opinion are always present, regardless of whether they’re welcome. And then there’s Baz. I know he’s gay, but I’m going to need a moment.

K, I’m back. Baz is everything Edward Cullen should have been. He owns the fact that he’s a snob and an elitist and a bully. Plays up to it. And he doesn’t turn his vampirism into some massive mopey existential crisis. He’s also devastatingly handsome.

Simon is a little vanilla next to his friends, but he’s goofy and funny in a wide-eyed way and the perfect counter to Baz: clumsy and chaotic where Baz is sophisticated and restrained. In fact, it’s Baz and Simon’s relationship that really makes the book.

I fell in love with Rowell’s particular brand of love story in Eleanor and Park. Not only does she write teen relationships incredibly well, but her romantic leads aren’t the usual suspects, not the adorkable girl and the seemingly out-of-her-league guy with a shadowy past. That alone is refreshing. As is the fact that the characters have complex lives and problems that go beyond ‘Does he like me?’ And Baz and Simon are no exception. I particularly appreciated that Rowell doesn’t make an issue out of these characters being gay—the major barrier they face as a couple is that they’re destined to kill each other. Rowell puts their relationship, not their sexuality, in the spotlight. It’s awkward, confusing and wonderful—the way love is at eighteen.

Overall, I really enjoyed Carry On. It’s funny and heartfelt and well paced, but I almost wanted to take the characters and the love story and put them in another world. The fantasy is weak—I’m not convinced the story would suffer if Rowell took the magic out—and it’s too derivative of ‘Harry Potter’ for my liking. It worked in Fangirl where Simon Snow serves as a clear and deliberate parallel to Harry, but as a stand alone book the offering is a little thin and if I hadn’t read Fangirl I wouldn’t have known what to make of it. The parody needed to be stronger or Rowell needed to create a world more fully her own. If you haven’t yet read Rowell, this isn’t the place to start, but if you loved Fangirl, Carry On makes for fun reading.

Thank you to the publisher for providing a copy of the book in exchange for an honest review.

Carry On is available via Amazon, Book Depository and Kobo.