Last week we recommended ‘Six Spring Reads’. This week we’re narrowing the field and recommending some of our favourite recent YA reads. The six novels below are stories rooted in the real. They are narrated with bold, original voices and striking prose. Each tells a very different story, but all contain a bit of grit that agitates and unsettles. We hope you enjoy!

The Light That Gets Lost by Natasha Carthew 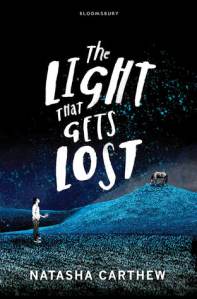 A forceful, intelligent read: violent and bleak but edged with resilience and hope.

Hiding in a cupboard among his family’s winter coats, seven-year-old Trey witnesses the murder of his parents and near-murder of his brother: ‘A house fallen silent with three shots, four just about.’

Eight years later, the demon inside Trey is driving him towards revenge. He knows that the man who sent his parents to an early grave and his brother to a nursing home is a man of the cloth and works at Camp Kernow—a work farm for delinquent youths. Trey has committed a crime to earn a place in the camp, determined that ‘This was the place where things were about to rewind to the point of wrong and settle back right.’

The Light That Gets Lost is a thinking reader’s dystopia: a story of innocence lost too soon; of revenge, corruption and power; of systems that prioritise money over people, but also a story of friendship and loyalty.

The Light That Gets Lost is out 11 November 2015 and is available for pre-order through Amazon (Kindle), Book Depository and Kobo.

A hard boiled coming-of-age story with smarts and sass.

Summer is coming and the winds of change are blowing hard through St. Kilda. Fifteen-year-old Skylark Martin can ‘feel it in her waters’. A poster appears across the road from her dad’s record shop: ‘a stencil of a girl’s face, three feet high below a concrete sky … Three black tears trailed down her cheek.’ A week later a brick comes through the shop window, thrown by unknown assailants in a white jeep—a bumper sticker reading ‘Love Live Local’ the only clue to the assailants’ identity. Meanwhile, The Paradise music hall is coming down, making way for new developments. Skylark’s only friend, party-girl Nancy, has plans to trip the light fantastic out of town and a sad boy with a sketch book has taken up residence at the marina, looking for clues about his dead sister.

Skylark is sure all these things are connected, she just can’t figure out how. Fortunately, her kid brother, Agent Seagull ‘Gully’ Martin, is on the case and she’s designated babysitter. His investigation takes the Martins deep into the St. Kilda underbelly: shady stakeouts, red light street corners, underground gigs.

Girl Defective is a hard boiled coming-of-age story with all the sass and swagger of Raymond Chandler, a killer soundtrack and a distinct Aussie accent. 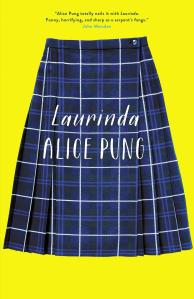 A keenly observed story of diversity, identity and finding where you fit.

Fifteen-year-old Lucy Lam can’t believe her luck when she wins a scholarship to Laurinda, one of the city’s most exclusive private schools. And her family couldn’t be prouder: having arrived as refugees from Vietnam a decade earlier, her father is a factory shift worker and her mother fills illegal sewing orders for designer brands in their back shed. They see Lucy’s scholarship as her ticket out of the western suburbs. But before Lucy can start thinking about university and her future career, she has to survive Laurinda.

Laurinda is a story of identity and conflicting desires. Lucy struggles to balance the pressure to fit in with the need to maintain her unique identity. It’s a conflict all teenagers experience to some extent, our adolescent years being a time when we often feel torn between our families and our peers. However, for Lucy the conflict is particularly challenging as she must negotiate both class and cultural boundaries.

Laurinda is available through Amazon (Kindle), Book Depository and Kobo. 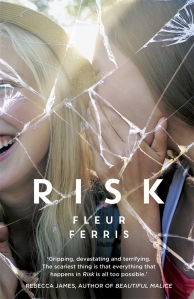 An unsettling story of a digital age nightmare.

When best friends Taylor and Sierra strike up a conversation with Jacob Jones on Mysterychat, it’s just a bit of fun—something to fill an afternoon at the end of the school holidays. Then Jacob starts emailing Taylor and she thinks maybe it’s something more, maybe it’s love. But it turns out Sierra’s also been chatting with him, and they have a date on Friday night.

Around the time Sierra should be heading home, she calls Taylor and asks her to cover for her so she can spend the night with Jacob. Taylor is jealous and annoyed—Sierra’s done this before. But when Saturday morning turns to afternoon, with no sign of Sierra, Taylor and her friends begin to worry. Where is Sierra and why isn’t she answering her phone?

Risk is the stuff of modern nightmares, made all the more unsettling by the fact that predators like Jacob Jones  are both real and invisible.

Risk is available through Amazon (Kindle) and Kobo.

Pieces of Sky by Trinity Doyle 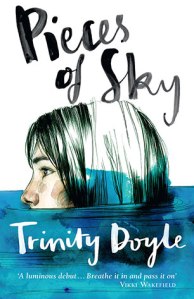 A moving debut about grief, loss and moving on.

Lucy’s brother, Cam, has been dead eight weeks and it’s time Lucy started piecing her life back together. Time to get back in the pool. ‘Today should feel right,’ she tells herself. ‘Today school goes back and the routine of train, study, train can start again.’ Only Lucy—state champion backstroker—can’t make herself get in the water. She can’t find her way back into her old routine or enjoy hanging out with her old friends whose lives revolve around swimming.

Her mum has completely shut down and hardly ever gets out of bed, and her dad doesn’t even notice when she stays out all night. Her Auntie Deb, up from Newcastle, just doesn’t get it. Even Cam’s best mate, Ryan, has left town. The only people Lucy feels she can turn to are her estranged best friend from primary school, Steffi, and Steffi’s cousin Evan, who’s just blown in from Sydney and has problems of his own. And then one night Lucy finds pictures of a faceless girl hidden among Cam’s other drawings and strange, poetic texts start appearing on his phone from an unknown number.

In her search to discover the mystery girl and what really happened to Cam the night he died, Lucy finds a love of her own as well as some hard truths and a family secret.

Pieces of Sky is a moving novel about grief, growing up and moving on.

Pieces of Sky is available via Kobo.

A Small Madness by Dianne Touchell

An unsettling read that explores the shadowy space between the real and the ideal.

Rose and Michael’s first time is awkward and illicit and wonderful. But Rose and Michael come from strict families where sex is not discussed and nor is the importance of taking precautions. When Rose learns she’s pregnant, her confusion and panic quickly shift to denial. Her mother taught her that ‘A happy face reflects a happy home,’ and so Rose, a talented actress, decides to pretend the pregnancy isn’t real. She convinces herself that if she can play her part convincingly, it will become the truth. Michael is initially (unfairly) angry  with Rose and grows increasingly frustrated with her denial. But ultimately, he buys into her fantasy. Though he watches Rose make herself sicker and sicker in order to maintain the pretence, he can’t bring himself to tell anyone about the pregnancy for fear of disappointing his father.

A Small Madness is available via Amazon (Kindle), Book Depository and Kobo.

We love, love, LOVE a good YA read (especially Aussie titles). If you have recommendations, let us know in the comments below!