Once, when I was young, someone said to me in reproof for some thoughtlessness, ‘You must learn how easy it is to hurt those you love…’ Then, I believed that; afterwards I found that it was not true, for it is easiest to hurt those who love you—those you yourself love may not be open to harm from you, according to the measure of their regard for you. But if they in turn love you, then beware. Everything you do will have tremendous meaning for them.

It’s easy to forget just how powerful language can be, even if you do your best to seek out ‘good’ and even ‘great’ books. Sometimes with all the reading and writing I do I wonder if I’m not becoming just a tad desensitised to that seductive pull the right turn of phrase can have. And then, very occasionally, I stumble across a piece of writing that leaves me utterly enchanted. Kenneth Mackenzie’s The Young Desire It is such a work.

Originally published in 1937 The Young Desire It was awarded The Australian Literature Society Medal that same year, and was recently republished as one of the Text Classics series with an introduction by David Malouf. It was Mackenzie’s first novel, which he began writing at seventeen and saw published before his twenty-fourth birthday. It was largely informed by his school days at Guilford Grammar School in Perth. 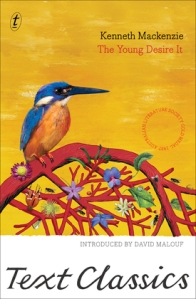 The story itself is simple: A teenage boy is sent away to boarding school where he unwittingly attracts the attention of a young master, and later begins a relationship with a girl he meets at home in the holidays. What is so extraordinary about this book is the intensity with which its protagonist, Charles Fox, experiences the world. Pedestrian scenes: A train ride, a stroll across a paddock, even grinding SWAT VAC sessions tremble with the unbounded vibrancy of youth. The language of The Young Desire It pulls the reader back into those wondrous and terrifying extremes of emotion that, as adults, we largely learn to temper. It is a disquieting and exhilarating feeling to regain that heightened perspective, if only for the length of the book.

Set in rural Western Australia in the 1920s, the landscape is perhaps the book’s most vivid character, antagonising the formality and decorum of the School with its oppressive summer heat and raging winter storms. It moves through its arc of seasons, indifferent to the discomfort and pleasure it brings. And Charles is very much a creature of this landscape, slowly awakening to his desires and pursuing them without understanding how they affect those around him. This is a story about innocence, but innocence in its true sense—not something sweet and virtuous, but uncomprehending and vulnerable.

It is not a perfect book. The narrative has an erratic energy, jumping between characters seemingly at random, which is often disorienting. In this early work Mackenzie’s talent is still somewhat raw, as might be expected from a first novel. However, when he settles on a subject his language turns fierce and potent.

There are several confronting scenes as Charles is first bullied by older schoolmates and then becomes a favourite of the lonely young master, Penworth. Like Nobokov’s Lolita, this is not a read for the easily offended, but like Lolita the disturbing events of the story serve to prove the enchanting power of the language.

The Young Desire It is an exemplary piece of Australian literature: a young man growing up in a young nation. Both are wild, beautiful and struggling to understand their place in a much older world.

The Young Desire It is available through Amazon (Kindle edition), Book Depository and Kobo.

If you enjoyed The Young Desire It, here’s some other titles that might tickle your fancy: