The first thing I learned about The Revenant was that, according to film critic and professional asshat, Jeffrey Wells, it’s ‘not a movie for sissies’ and ‘forget women seeing this.’ That sounded to me like a challenge, and I immediately YouTubed the trailer where I learned fact number two: the film is basically Leonardo DiCaprio and Tom Hardy being rugged mountain men, fighting bears and using their wits and manly muscles to survive in the wilderness. (Just a quick FYI, Wellsy, as a heterosexual woman, after watching the trailer I did, very much, want to see this film.) The third thing I learned was that The Revenant is based on Michael Punke’s 2002 novel of the same name and that the book was getting a rerelease to tie in with the film. I immediately emailed HarperCollins and begged for a review copy.

Before I get stuck into the book, I have to admit that I got impatient waiting for my copy to arrive and saw the film first (yes, Wellsy, against all odds I survived and greatly enjoyed the screening), and I’d be lying if I said that didn’t play into how I felt about the book. I’m going to talk a little about both here.

Second, going into the film, I knew Hugh Glass was a real mountain man and that he did survive a bear attack. But that was the extent of my historical knowledge. I probably wouldn’t have enjoyed the film quite so much had I realised how loosely director Alejandro González Iñárritu followed fact. I did a bit of Googling on Glass before reading the book, and if you’re keen to learn more about him, fellow book blogger, Sarah over at I Would Rather Read, included some great info. and links to further reading in her film review.

So. The book. Like the film, it begins with the remaining eleven members of Captain Andrew Henry’s 1823 fur trapping expedition heading north along the Grand River towards Fort Union. Glass, one of the senior fur trappers, is attacked by a grizzly and seemingly fatally wounded. Henry leaves two men, Fitzgerald and Bridger, to wait with Glass until he passes and give him a proper burial. However, Fitzgerald is only interested in the extra cash he’ll earn for staying behind, and when he sights a band of Arikara near the camp, he convinces the impressionable young Bridger that all three of them will die if they don’t make a run for it. The men take Glass’s knife and gun (his most prized possession) and leave him for dead.

Against all odds, Glass survives. And as his strength grows, so too does his thirst for revenge. As soon as he is able, he sets out to find his gun and take the lives of the men who almost robbed him of his.

The story is rich in detail, with Punke alternating between scenes of Glass’s struggle to survive in the wilderness and flashbacks to his early life in Pennsylvania, the two years he spent as a pirate and prisoner of Jean Lafitte and later a stint living with the Native American Pawnee tribe. Punke also crosses to Fitzgerald, Bridger, Captain Henry and General William Ashley (co-founder of the Rocky Mountain Fur Company) throughout the story. While Punke has evidently undertaken considerable research, the line between fact and fiction is somewhat blurred throughout, mostly because the facts themselves are slippery, as Punke explains:

The fur trade era contains a murky mixture of history and legend, and some legend no doubt has invaded the history of Hugh Glass … That said, I have endeavored to stay true to history in the main events of the story.

As someone who didn’t know a lot about Glass or the fur trapping era going into the story, I enjoyed The Revenant. Punke includes a map at the front of the book, and, as an Aussie who’s never been to that part of the US, I found it very useful. And even if the details of the plot are questionable, I felt I came away from the narrative knowing a lot more about Glass and the fur trade in general. Punke’s prose is descriptive yet clear and, consequently, I’m now convinced I could build a shelter, light a fire and gut a snake, should the need arise (though hopefully I won’t have reason to test the theory). The story moves at a steady pace, and I was easily swept along.

What I felt The Revenant lacked was characterisation and atmosphere. Punke offers so little of what the characters are thinking and feeling, aside from physical sensations (namely pain, hunger and cold). At times, they appear mere agents being moved around a storyboard. The occasional insights into their thoughts are brief (rarely more than an italicised sentence) and often wooden. Consequently, I found it difficult to invest in the characters and Glass’s revenge quest. Map aside, I also found it difficult to picture the landscape. The details Punke offers are purely practical, so the reader knows what resources Glass has available and what dangers he faces. I could picture where everything was, but not how any given scene looked, and I found myself Googling cottonwoods and other types of flora and landmarks to get a clearer sense of the landscape and what it must have been like for Glass exploring that terrain alone.

To be fair, I think one of the reasons I wanted more from Punke here was that in the film, characterisation and atmosphere are so strong. DiCaprio’s performance is (shock) incredible—even though he barely speaks, he manages to clearly express everything Glass is thinking and feeling. For much of the film, the camera hugs the actors so that the viewer sees the action unfold through their eyes, occasionally zooming out to offer sweeping panoramas of the landscape.

Building on this, while the film may not be as historically accurate as Punke’s novel, it makes for a better story. In the film (and I don’t think this is giving too much away) Glass has a son who also stays behind after the bear attack. Fitzgerald murders the son and lies to Bridger about seeing the Arikara. I found it far easier to invest in film Glass’s quest to avenge his son rather than book Glass’s determination to get his gun back. In both, he also plans to kill Fitzgerald and, without going into detail about how that plays out in either case, I found the book’s ending to be a bit of a fizzer, especially compared to the film.

That said, The Revenant still makes for a compelling read. For fans of the film, it’s worth a look, if only to get a little more of Glass’s story. And, film comparisons aside, as a piece of historical fiction, Punke does well to blend fact and fancy to create a gripping story. 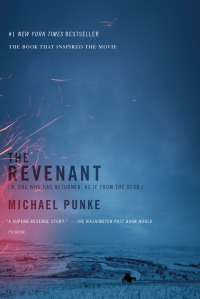 See The Revenant on Goodreads and purchase through Amazon, Book Depository and Kobo.

Thank you to HarperCollins for providing a copy of The Revenant in exchange for an honest review.